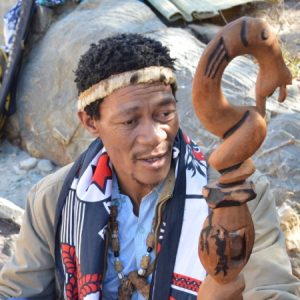 Deon “Kummt’sa” Noubitsen, a healer in the tradition of the !Xo, known as the elephant shamans which are a rare and fast becoming extinct group of high shamans from the First Nations of Southern Africa. A powerful Gqira ( Southern African medicine man) who understands the power of plant medicine and often connects with their ancient wisdom by providing indigenous remedies to modern day spiritual ailments to many of his clients who come from all over the world.

Guided by the ancient ones Kuumtsa brings forth the wisdom of the first nations and creates traditional craftwork that symbolizes the lineage in ornaments like necklaces, walking sticks and the paintings on an ostrich egg. He has also run several trance dances which is a healing dance for individuals and the community which directly connects one to the ancestors who bring about the healing through touch.

Kuumt’sa has been featured on several articles in the media where he talks about how indigenous knowledge can help the world to heal. He recently co facilitated a retreat on the trail of the ancestors where he shared in the wisdom and knowledge of the first nations of Southern Africa.

GET IN TOUCH WITH US

This platform has been created to connect people with ancient wisdom, and the with transformational leaders, spiritual teachers and healers who carry this wisdom.
Contact Us
Scroll to top