Nestled on the Magaliesberg Mountain range, overlooking the township of Mamelodi in Pretoria, is the Mothong African Heritage (Mothong) initiative. Proud, picturesque, serene and regal, it remains a shining beacon and true to the ancestral instructions that were given to its founder, Traditional Dr Ephraim Cebisa Mabena at the turn of the millennium. 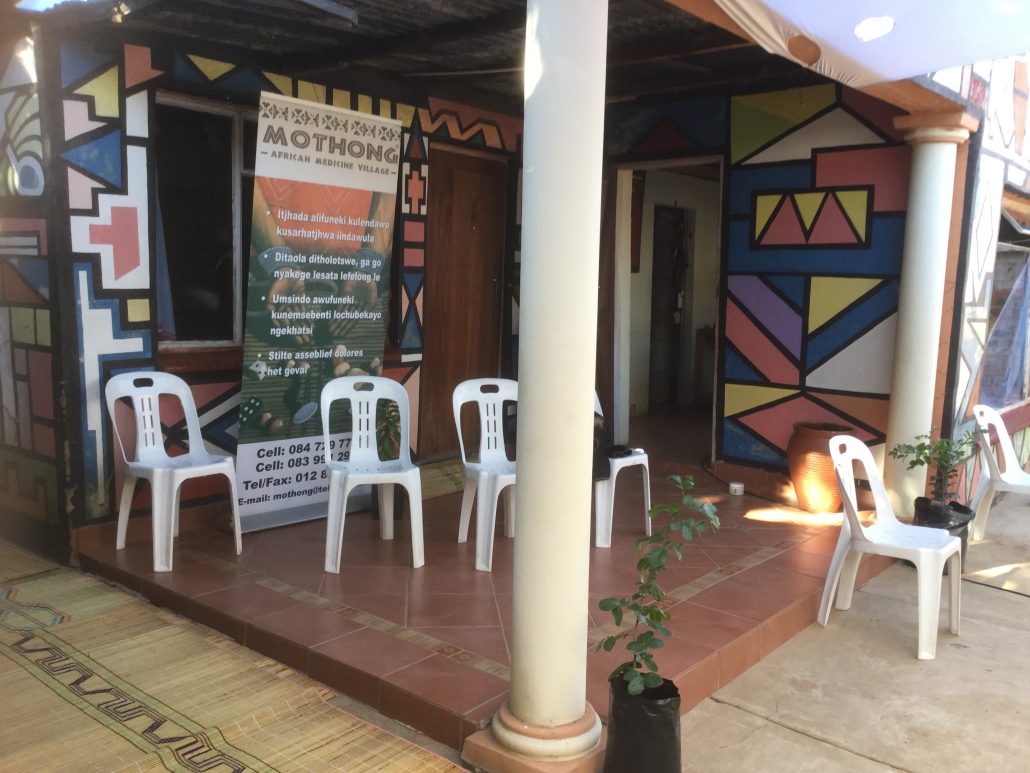 Manifesting Transformation through a Dream

Mothong African Heritage is a former dump site-turned-into-sacred-sanctuary. The project was initiated in 2001 by Traditional Health Practitioner Mabena, a traditional healer, botanist and proud resident of Mamelodi Township.

Guided by his ancestral spirits, he was directed to a piece of land that was, up to that point, an informal dumpsite, a crime den, a cesspool of murder and rape, a chop-shop for stolen cars, as well as a hideaway for the community’s drug abusers.

In the 1970s and 1980s – during the height of apartheid – the mountain had served as a hiding place for political activists on the run from the authorities. It later gained notoriety as a place of torture when the security police began to use it as an interrogation site for captured activists. Because of its panoramic view of Mamelodi – a hotbed of resistance against the oppression, it further became an observation point for the security forces to monitor activists and events in the township.

By the 1990s it became a wasteland, and at this time he had a series of dreams in which one of his ancestors told him to rescue this piece of land, clean up the rubbish and build a house of healing. While he initially ignored the calling, the visions did not stop until finally, in 2001 he began what appeared to be an impossible task.

Risking life, limb and ridicule; using rudimentary tools and with the help of volunteers, TDr Mabena spent over two years witnessing the atrocities of human nature as he cleared the land of the elements of crime and degradation, subsequently transforming it into a nature conservation site of prized indigenous medicinal plants.

Once a broken, trauma-filled piece of land — a waste-yard where criminals dumped cash boxes looted during cash-in-transit heists, where rapists ravaged their helpless victims and murderers hid bodies — has been transformed and is now a place of learning and healing.

With the assistance of his wife, Mama Mabel Mabena – also a Traditional Health Practitioner, and neighbour Mamorake Moila, over 20 years it has become a friendly place for the community, an educational site, as well as a biodiversity site in partnership with a number of government and tertiary institutions.  Mothong African Heritage has become a peaceful botanical garden and heritage site where culturally valuable and important plants are cultivated and protected.

Since its inception in 2001, Mothong has now developed as a research site with several educational and research agencies investigating indigenous plants whose properties are highly sought after by some of the world’s leading pharmaceutical companies.

True to its initial mandate as given by the healer’s ancestors, the site boasts being a leading African culture and heritage site. It holds promise for the creation of hundreds of jobs through a community-based pilot plant for the manufacturing of indigenous health and beauty products for international markets.

Examples of research include the University of Pretoria Department of Plant and Soil Sciences, who  have been collaborated with Mothong on aspects of medicinal plant science research. Other collaborations between the Botanical Society of South Africa and the  National Herbarium recently launched a project to collect, identify and document the diversity of plants along the Magaliesberg biosphere mountain ridges, which are recognised by Unesco. A collaborative project led by the Department of Science and Technology aims at cultivating plant species with medicinal and cosmeceutical potential and developing a processing plant on site. Further partnerships include programmes in which botany and natural sciences students  study indigenous plants and medicine to help with research in areas such as HIV, tuberculosis, and recently, Covid-19.

A Site of Innovation

One of the most significant supporters to the project is the national Department of Science and Technology (DST) and which, in general, supports Indigenous Knowledge Systems (IKS) and has developed the Indigenous Knowledge and Bio-Prospecting and Product Development (IKBPD) Programme. Into this programme, the Mothong project is a natural fit and finds an easy home.

Incubated under the DST’s IKBPD Programme, the project has been led by the University of Pretoria in the development of cosmeceuticals, i.e. cosmetics with medicinal properties, for a range of conditions such as skin cancer, eczema, acne, etc. Mothong, as the local implementing organisation has, over the life of the project, managed to create multiple job opportunities. In 2013, the department of environmental affairs gave the project R1.4-million to fence the gardens and drill a borehole and, as part of the government’s extended public works programme, to employ 80 people to erect the fences, place rocks around the gardens and do general work.

It is envisioned that once the project is formally off the ground, it will be able to provide livelihoods to more people and become more permanent in nature. Going forward, the plan is to continue propagating medicinal plants on the mountain slopes where the national flower, the protea, grows in abundance. Examples include ummilo, a tree whose fruit is used to treat colds and flu; umdladlathi, which eases the pain in swollen ankle and knee joints; and udodhlana, or wild dagga, which boosts the immune system and is said to be effective in the treatment of various cancers.

Mothong African Heritage has received many accolades and has been the recipient of many awards, including the National Heritage Council’s 2019 Golden Shield Heritage Awards in the category of National Living Treasure.

This environmental haven in the urban metropolitan township of Mamelodi – part of the spatial planning project of apartheid – dispels the myth that nature conservation is only the preserve of wealthy landowners with nature and game reserves. It instead brings to light the fact that nature conservation is inherent to Indigenous Knowledge Systems, and was practiced by African Ancestors in whatever contexts they found themselves in for time immemorial.

Ntate Mabena’s dream continues. He inspires young people to follow in his footsteps in listening to dreams, clearing up dumpsites and converting them to viable projects.

He hopes to build a plant where indigenous plants can be processed into cosmetic and medicinal products.

His greatest wish is that Mothong African Heritage grows into a thriving Centre of Excellence for African Indigenous Knowledge Systems.

The Next Generation – Kasi Economy Picnic

Kasi Economy Picnic (KEP), the brainchild of Mongezi Mabena, Ntate Mabena’s son,  is an open market that invites local businesses to come showcase their products and services. This is a Kasi-based farmer’s market type of gathering for small or startup businesses and medium businesses in Kasi, and families in Kasi, for the people of Kasi, situated at the beautiful Mothong African Heritage site.

KEP is a Mothong African Heritage campaign that aims to give local businesses a space to promote and sell their brands to the communities that they live in. The idea is to also help build the local economy where these businesses can grow to an extent that they can provide employment and also circulate the wealth within the communities they live in.

Because the local entrepreneur does not have enough capital to rent a facility at a mall, neither do they have the financial muscle to participate in corporate marketing strategies and platforms with promo ads… Kasi Economy Picnic is there for their businesses to reach out to a larger audience and promote their brands to become household names.

The environment of Mothong sets KEP apart. The area accommodates outdoor activities such quad biking rides, mountain biking, and going on hiking trails. It includes face painting for children, a coffee and muffin stall, a massage stall, freshly cut vegetable stall, carwash and a variety of food stalls. It is literally a Rand Show in a township with all different kinds of businesses that cater for all age groups.

How to Participate
If a business shows interest in participating, they are invited to contact Kasi Economy Picnic who will email them the application form. Due to Covid-19 regulations, the KEP can only accommodate 30 stalls and caps participants to 500 people. The stall fee is R350.

Find Out More About Mothong

GET IN TOUCH WITH US

This platform has been created to connect people with ancient wisdom, and the with transformational leaders, spiritual teachers and healers who carry this wisdom.
Contact Us
Scroll to top